Review of BOOM from Brevard Culture

PHOTO: Adam Minossora and Megan Raitano in BOOM at Theater on the Edge in Orlando. Photo by Marco DiGeorge.

"A masterful cast" - by Joan Taddie

Our latest review is in for BOOM! Click the link below to read the full review...

Review: BOOM resonates at Theater on the Edge
By Joan Taddie, Theater Critic

Peter Sinn Nachtrieb’s “Boom” heralds the timeless cycle of Alpha and Omega. Between the cataclysmic booms here on Earth is a kaleidoscope of random events where life may emerge once again. The winner of the Survival of the Fittest Contest then gets to search for the clues of their emergence and develops a story of their evolution that best matches the culture and the politics of the day.

Theatre On The Edge welcomes their audiences to observe an intimate and life-like exhibit in a museum 65 million years in the future that tells the story, or the myth, of our extinction when the Earth collided with a giant comet.

This one-act dark comedy with a run-time of 100 minutes takes place in an exhibit space at the Oceanic Museum, complete with red velvet ropes and stanchions. In this space, set designer Samantha DiGeorge creates another ingenious, hyper-realistic set that reflects the result of the reconstituted technology based on the evolution and the archeological discoveries of the species living on the planet before the latest apocalypse. DiGeorge leaves an abundance of clues on stage for an inquisitive audience to identify. Have fun!

“Boom” begins with the introduction of a museum guide, Barbara (Elaitheia Quinn), first on a video screen and then in person, as she prepares the exhibit for the dramatic performance of the end of the previous civilization as experienced by the last man and woman on Earth. She wears a uniform and make-up that might be worn by a character from another world in “Twilight Zone.” Barbara controls everything pertaining to the reenactment, including playing a booming timpani with dramatic flair, from a control room next to the small exhibit space that serves as the underground bomb shelter/lab of Jules, a marine biologist (Adam Minossora). 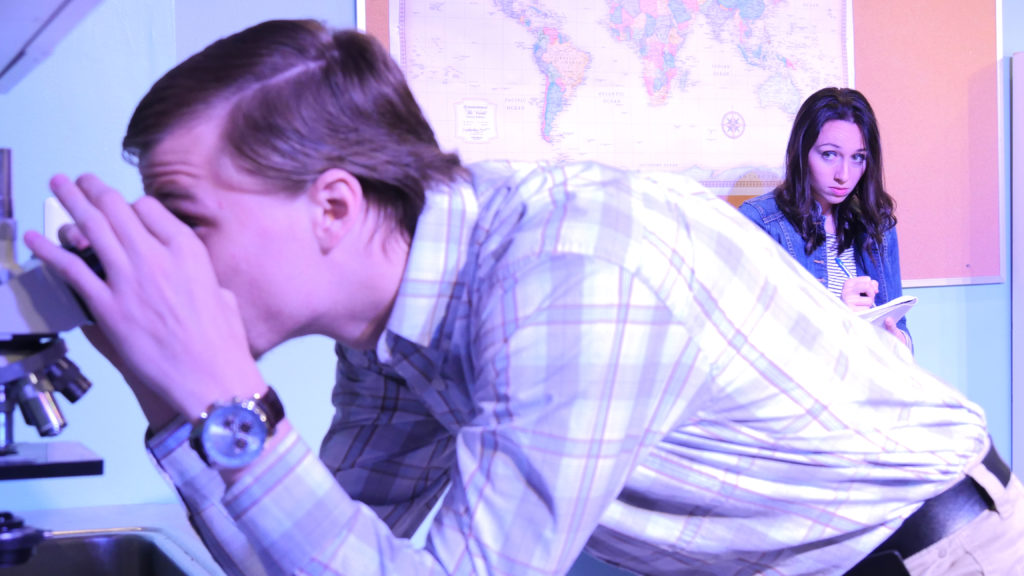 From left: Adam Minosorra and Megan Raitano in BOOM at Theater on the Edge. Photo by Marco DiGeorge.

Jules has concluded from his observations of unusual sleep patterns of the fish he has studied while doing research on a tropical island, that the Earth is about to be hit by a massive comet that will lead to the extinction of most life on the planet. He has prepared an underground lab with supplies and instruments to survive the collision, including a fish tank and an oscilloscope to monitor the fish behavior that would indicate the impending arrival of doom.

To ensure the continuation of the human species through random selection, Jules has posted an advertisement on line for “sex to change the course of the world” with “no strings attached.” Only one female responds, Jo (Megan Raitano), who is a journalism student conducting research for a project verifying “random sex as the last glimmer of hope in a decaying society.” This random coupling proves to be incompatible, which only adds to the humor of the situation. Jules is gay and has never had sex with anyone. Jo is sexually aggressive, but hates babies. Jo also has an irrational fear of danger and falls to the ground unconscious whenever danger seems imminent. 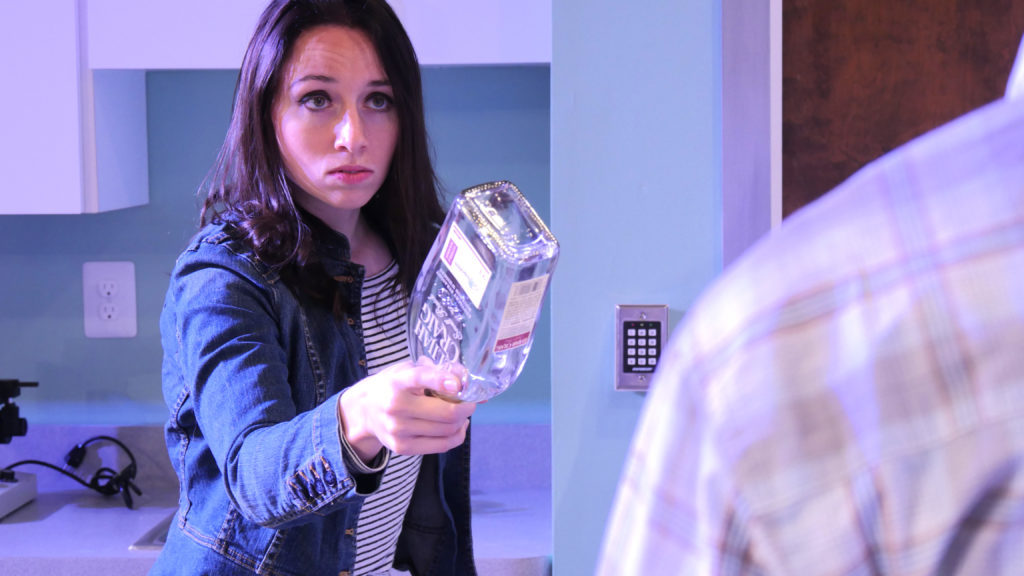 Megan Raitano in BOOM at Theater on the Edge in Orlando. Photo by Marco DiGeorge

Director Marco DiGeorge, has put together a masterful cast. Minossora and Raitano embrace the intense physical comedy necessary to define the differences in their characters. Jo wastes little time getting to what she came for…random sex! DiGeorge creates a riotous romp that ends with Jo on the ground unconscious. Raitano’s character is manipulated like a puppet over and over again by Barbara’s use of the levers in the control room and must continue to fall unconscious until Barbara is satisfied with the outcome of the scene. Raitano performs this effortlessly.

Minossora skillfully portrays Jules as the complex, socially inept, brainiac who is more comfortable talking to his fish than to another human. Minossora’s exceptional and disciplined focus presents Jules as a tightly wound, intense character with eyes that give away his inability to think about anything other than the looming impact and his plan to save the human race from extinction. 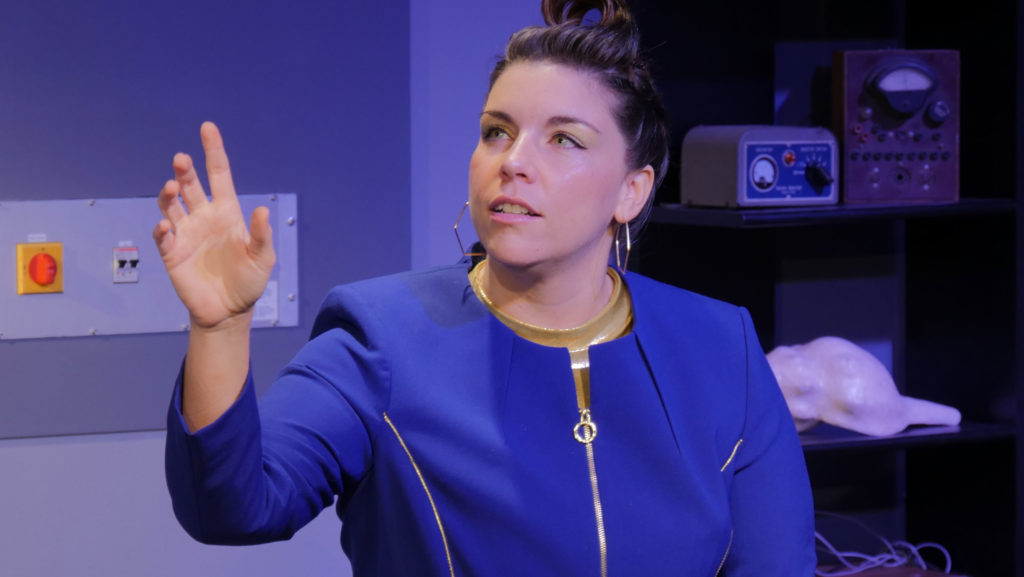 Elaitheia Quinn in BOOM at Theater on the Edge in Orlando. Photo by Marco DiGeorge

When the play begins, Barbara is depicted as a museum guide who almost robotically sets the scene for the audience as she introduces the reenactment. As the presentation continues, Quinn cleverly exposes her increasingly personal connection to the exhibit performance with amazing facial expressions as she silently, but dramatically, says the lines along with the characters and emotionally works the levers in the control booth that can change the outcome of the story to her liking. She occasionally freezes Jules and Jo in the scene and leaves the control booth to talk directly to the audience. She admits that the story is not totally realistic. After all, “Where is all the poop?” Her comedic timing, especially when she doesn’t finish a sentence except with a tilt of the head and an amusing look, is hilarious!

“Boom” premiered in New York City in March 2008 at the Ars Nova Theatre. It has the distinction of being the most-produced play in the United States during the 2009-2010 theatre season.

Marco DiGeorge and his talented creative team offer an intriguing and entertaining play about the end of the world. There will be smoke and loud booms and flashing lights. But, there will also be acting that is out of this world and laughter to brighten the world we live in today.

We are excited to be back onstage with our 2nd run of Say Goodnight, Gracie by Ralph Pape!

Please go to Our Show Page for more info :-)